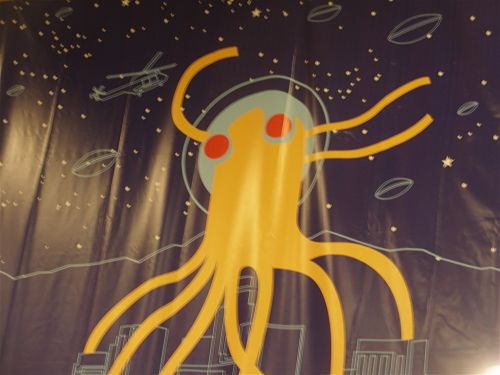 Poore competed out of region, since Seattle resides in the Northwest. As a result, he was unable to qualify for the United States Barista Championship through the WRBC.

COFFEE
Zoka’s Palladino, a two-bean blend of Brazilian Cerrado and Ethiopian Sidamo. Brazilian helps round out fruit notes and bring in some brown sugar.

SIGNATURE DRINK
Made sauce last night with blueberries and mint leaves. Pull shots with that, then add crème anglaise, which has heavy, musky brown sugar sweetness. Stir and try to finish it within two sips.

COFFEE
Griffith focused on “sweetness,” saying, “One of the sweetness coffees I’ve tasted all year is Maravilla, from Huehuetenago, Guatemala, farmed by the Morales family. Start sipping, you’ll get Clementine with citrus, then juicy citrus, followed by cocoa butter. Washed process coffee brings balance of flavors. The eastern facing hill gets high sunshine in the morning and low light in the afternoon, leading to concentrated sweetness. The high altitude – 2000 meters – is also an important factor. The coffee is fairly light, with an Agtron reading of 65.

SIGNATURE DRINK
Typically you get one cup for a signature drink. This year: three, combined at the end. Start with cream whipped with vanilla bean, some sugar, and just a splash of orange blossom, to isolate aromatic citrus you get on nose of the coffee. Take a whiff to get aromatics. For the second portion, espresso with puree of Medjool dates. 1.5 tablespoons in each cup, combined with the shot. Take a whiff to get aromatics. Pour espresso-date mixture into the cream. Swirl to get the full color.

COFFEE
A blend from cross-town Verve Coffee Roasters: Ethiopian Yirgacheffe, Sumatra and Brazil. Peterson pointed out the bittersweet chocolate notes from Sumatra, apricot from Ethiopia and buttery caramel from Brazil.

“For the cappuccinos, note the caramel and bittersweet chocolate.”

Peterson instructed the judges to take the espresso shot in one sip, predicting bittersweet chocolate and “fruit forward apricot.”

SIGNATURE DRINK
For “The Benediction,” Peterson began by mixing a vanilla cream base using heavy cream, fine sugar and half of a vanilla bean. “I wanted to draw on the notes in The Sermon (as the espresso blend is called). The apricot is really going to come through in this vanilla.” Peterson made a chocolate sauce with Ghirardelli semi-sweet and Scharffenberger bittersweet chocolate “whose tang mimics acidity in The Sermon.” The next sauce: burnt caramel. Use a copper pot and burn sugar, add Karo, butter and heavy cream. “It’s bittersweet, smoky and has buttery taste that you’ve already experienced in The Servant. On top of this, pull a single shot of espresso. Melt it all together…It’s kind of like espresso affogato.” Stir and mix all of the layers together.

SIGNATURE DRINK
Kim lined the bottom of his glasses with fresh squeezed orange juice jelly, then whipped cream infused with Earl Grey tea. Pour an espresso shot on top. Stir, and they’re all supposed to mix, but the jelly stayed put.

SIGNATURE DRINK
Porter infused cream with apples, local honey and cinnamon, then poured espresso shots. “Growing up in small agricultural town, I wanted to do something personal to represent where I’m from.”

COFFEE
Maria Millaños grows coffee in Via Maria, Colombia. Her family farm, Finca Mariana, has been a model of sustainability. They grow plantains, sugar cane and most importantly in this case, coffee. Maria has also made efforts to show other coffee producers techniques in sustainability, including composting and water treatment. Teichen chose a micro-lot called Nariño, featuring an “incredible rosemary aroma.” She explained that due to the particularly small size of the farm, you get brown sugar, since only the brightest cherries are selected. “Due to the high elevation, you’ll find crisp cherry acidity in the finish.”

“When combined with milk, fudge notes melt away into a delicate maple sweetness.”

SIGNATURE DRINK
A two-part experience. Teichen provided each judge with an aromatic sample plate holding ground Nariño, a sprig of aromatic rosemary and a chopped sample of 55% dark chocolate from San Francisco, due to its acidity. The second part: the drink itself, prepared with ganache combining the chocolate found on the plate. “Ganache strengthens fudge flavors.” She added shots of Nariño, then layered whipped cream infused with Nariño. [The whipped cream] “balances texture and rounds out the Nariño’s brown sugar sweetness.” Stir it thoroughly, lean down and inhale aromatics, then drink.

For the cappuccinos, adding milk to the coffee created a “jammy texture.”

SIGNATURE DRINK
Pedde presented the judges with dishes of ingredients he’s been tasting in the coffee, including cherries, figs, dried persimmons and dates. He pour a shot of espresso, sipped and said, “I just tasted the coffee and will use ingredients to exaggerate the flavor of the coffee,” starting with brown sugar, strawberries (which he found strawberry sweetness at the bottom) and dried persimmon. Pedde created a fruit infusion to add to the signature drink. He warned the judges: “There’s going to be some fire, there’s going to be movement. Don’t be nervous.” He lit the burner, which harnesses the flavors of the fruit. “I wanted to create a coffee forward beverage, mimic the flavors…The sweetness will be enhanced by the brown sugar and strawberries, and the brightness of the coffee will be heightened by the persimmon.”

SIGNATURE DRINK
Kram poured a shot of espresso into a three-ounce cup and topped it with orange zest to bring out “sweet citrus.” Then she added steamed half and half and allowed the foam rise to the top. She poured raw Turbinado sugar and bruleed it with a blowtorch.

COFFEE
Lopez utilized a “blend of Ethiopian Sidamo, a lovely washed Brazilian and a very exciting El Salvador.” She added, “Every espresso should have some Ethiopia in it, because Ethiopia is the birthplace of coffee.” With this coffee, “You should be getting some dried fruit tones, dried apricot, a little bit of boysenberry, and the lingering finish is going to have a creamy toffee.”

SIGNATURE DRINK
Lopez began by making cherry syrup with a cherry puree she made last night. It’s Karo syrup, “a corn syrup, but not the dreaded high-fructose corn syrup.” She used leftover milk from the pitcher for the signature drink. When Lopez thought of a signature drink, “The first drink that came to mind was cherry limeade, since I’m from Texas.” The cherry syrup creates the impression of lime, but there is no lime. In her espresso, Lopez used a dropper to add the syrup, which was supposed to form the shape of Texas, but didn’t.

SIGNATURE DRINK
Mournian based her signature drink on “Love in the Time of Cholera.” She quoted a passage from the novel, then explained her drink incorporates bitter almond milk. In the book, the ingredient contributes to poison, but not in this case. With the espresso drink, which utilized the milk, she served each judge a dish of pink peppercorn-rosewater granita with watermelon and sweetened condensed milk. The granita is a post-beverage palate cleanser.

COFFEE
Richardson went with an Ethiopian single-origin coffee, “clean with good balance.” He appreciates the “crema and beautiful mouthfeel” The tasting notes: “molasses, chocolate, brown sugar and of course blueberry.”

SIGNATURE DRINK
Richardson worked to find “something that highlighted that beautiful mouthfeel.” He discovered Mascarpone, a sweet cheese. He ringed the glasses with a little bit of cream to “accentuate the berry notes.” After adding pure cane sugar and espresso, he instructed the judges to stir before sipping to accentuate the flavors.

Day Two of the Western Regional Barista Competition concluded with the announcement of six Finalists. Before emcees Stephen Morrissey, Kyle Glanville and Chris Baca made the announcement, the crowd got a glimpse of the three trophies, which will be awarded Sunday. Each wooden trophy hosts a portafilter, tamper and espresso cup. First place gets a black cup, second place a tan and third place white. Each competitor was scored using an 870-point scale that accounted for barista’s technical ability and sensory experience. I’ll post more about scoring before tomorrow’s finals. Without further hesitation, here are the Finalists: I’m not qualified to judge the competitors, and didn’t have a chance to taste the drinks or see them up close. Also, I’m not a trained barista, so wouldn’t be able to evaluate their technical ability. Still, since you’re asking for an opinion, based on presentation alone, it seemed like the judges pretty much got it right, though there were 2-3 other competitors who could have slipped into Sunday’s finals.

that’s the reporting, now…what about the op-ed? 🙂 what was your take, who do you think did the best (based on your third party, non-tasting observation?)

Thanks for the correction. I changed it.

If anybody notices any other mistakes, please let me know. With all the noise in that room, it was tough to make out some of the words.

Correction:
The spro blend used by Sara Peterson is not “The Servant.” It is “The Sermon”

[…] Published January 25, 2009 competitors , general Food GPS comes through with some excellent coverage of Day 2 of the WRBC. Go check it […]

I was tempted to be the Al Michaels or Chick Hearn and start calling the shots (ha ha).

Even if you stuck around, you wouldn’t have been able to taste any signature beverages. It’s a little bit like “Iron Chef” in that way. Observation leads to frustration, but it’s still a great event.

That’s some detailed live journalism. Too bad I couldn’t stick around — and even worse that I couldn’t taste all those yummy drinks (but what I did have were all very well prepared, though.)

Maybe I’ll swing by for the beginning of tomorrow’s final competition.

I’m lovin’ the play-by-play yo! Already sounds like an intense competition!