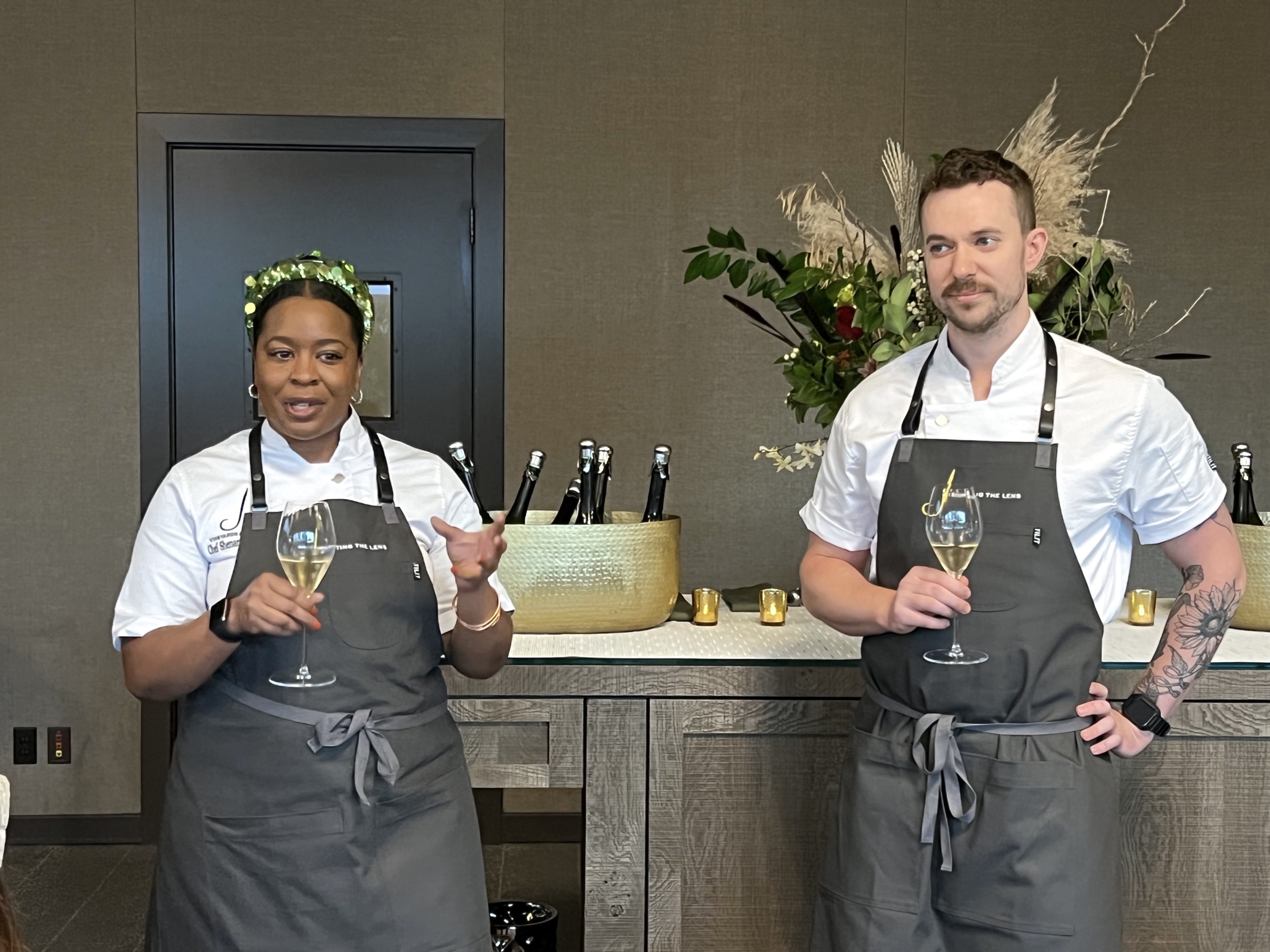 Shenarri “Greens” Freeman is the celebrated New York City based chef behind Cadence, which has diners and critics rethinking what’s possible with vegan cooking and soul food. She grew up in a large family in Richmond, Virginia. While attending Howard University in D.C., she started cooking for friends and became more intentional about food choices related to health and wellness, which help inform her holistic culinary approach. She briefly worked in the music industry before relocating to New York City in 2019 to attend the Institute of Culinary Education. She started working for Overthrow Hospitality and convinced the company to back her vision for modern vegan soul food that reimagines the food she grew up eating, dishes like Southern fried lasagna and waffles with fried oyster mushrooms instead of fried chicken. Cadence was a hit and has earned notable national accolades, including Esquire’s Best New Restaurants in America, 2021 and The New York Times “50 places in America we’re most excited about right now” in 2021.

Josh Lurie: Are there any misconceptions about vegan food or about soul food that you that you’d like to address or that you are addressing directly with your cooking already?

Shenarri Freeman: Yes. I think soul food is seen as something that can’t be healthy. It’s very meat forward. When in fact, it wasn’t always like that. You know, meat was something that was like once a week back in the day, or like a prize when we weren’t having meat three times a day versus now. Vegetables really used to shine.

And I think with vegan food, it’s just too much processed food on the market. It’s too much. People aren’t cooking with vegetables. You’ve got Beyond burgers, Impossible burgers, chicken nuggets, all types of things. And I’m just like, what’s the point? You might as well just eat meat. This type of processed chemicals and things that are going into these products. Where are the true health benefits? Where are the nutrients? Where are the minerals? Where’s the health? So things like that kind of gets me really curious. Is it something that people just want to kind of monetize the name or a brand? Or what’s trending even though vegan food’s been around forever? Or are people actually interested in your health? So you know, I think that’s a question that anybody cooking vegan food or putting out certain products really has to ask yourself? Like, are you going in for the money? Are you actually trying to help people? I’m not even for the money. Because I know if I do my job right, money will come. I’m actually in it for the health.

I’m always going to cook food that represents me. And I think just playing around with soul food and just kind of twisting people’s minds up about what it could be or being healthy, like vegan soul food, just creates a whole different conversation and makes people look at food a bit differently. So I think having these conversations with somebody, that’s really important, and something that you would share at the table doesn’t have to be vegan. Just being intentional with your food choices.

SF: First impressions are everything. Your eyes eat first. Plating and presentation play a huge role with my food. I look at cooking as an artistic expression so it’s important to showcase that with every plate. Taste, flavor, and texture are
non-negotiables. Lastly, ingredients. Vegan food already has a stereotype, I am changing that perspective. Using whole foods (vs. soy proteins or processed foods), local, seasonal, organic, natural sugars (maple sugar, date sugar, agave).

SF: Most recently would be my mom’s banana pudding. I actually dream about food occasionally so a lot of inspiration comes from that. I’ve seen her make this dish a million times, but never asked for the recipe. Knowing the technique and the layers, I put my own vegan interpretation of what the actual recipe could be. Substituted bananas for plantains, added a lemon coconut cream, vanilla wafers crumble, and caramel.

JL: What dishes would be on the table for a dream meal from your repertoire? Also, which people would join you at the table?

SF: Would love to sit down with Kelis and enjoy some Ethiopian food. It’s going to happen soon, I feel it.

SF: This is such an interesting question because the majority of the people that I’ve looked up to in this industry are now friends and people that I can call at any given moment. I am constantly inspired and honored to be a part of this black culinary renaissance happening. Ghetto Gastro (Pierre, Jon, Lester), Adrienne Cheatham, Fabienne Toback, Adjoa Kittoe, Martel Stone, Camari Mick, Krystal Mack – thank you for holding space for me.