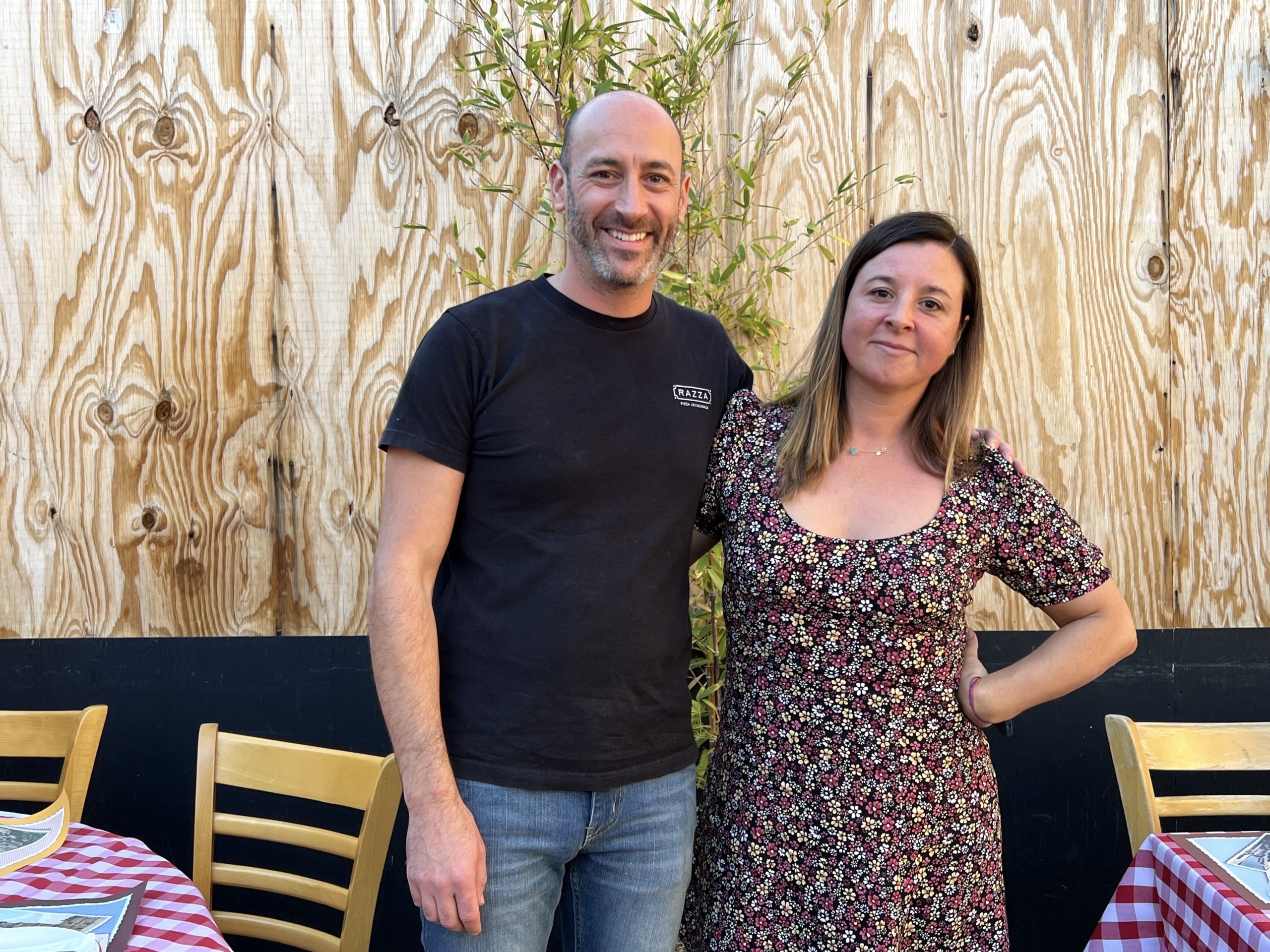 Dan Richer and Katie Parla discussed "The Joy of Pizza" on the piazza behind Mozza in L.A.

I recently met with two fellow New Jersey natives: celebrated Razza chef-owner Dan Richer and Rome based cookbook author and tour guide Katie Parla. They were in Los Angeles to promote their new cookbook, The Joy of Pizza, and we discussed pizza on the piazza behind Pizzeria Mozza, where Richer prepared a multi-course dinner that of course featured pizza. Parla and Richer had some interesting insights on pizza culture in the U.S. and Italy.

Josh Lurie: I saw you on “Chef’s Table: Pizza.” You’ve given a lot of thought to pizza over the years, I’m sure.

Katie Parla: I only think about pizza, basically.

JL: You’re synonymous with Rome at this point versus New Jersey.

KP: Yeah. I think people still identify me as a Jersey girl, to use an infantilizing term, but yeah, I write a lot about pizza. In Italy, Rome specifically, we have so many styles there, so I’m writing lots of words about it.

JL: What surprised you about pizza once you moved to Italy?

Well, I settled in Rome 20 years ago, when there were basically three different styles: the round one, which is super thin crust, barely any rim. So I was like, where’s the rim? I got used to it eventually. Then the bakery style, which is like six feet long, or however deep the bread oven is. That’s called pizza alla palla. And then pizza al taglio on the sheet pan. So there were so many pizza options, and I think when I was first encountering them, it was just a matter of understanding when you eat them. In what context? Some are for breakfast, some are more dinnertime. Some are like fast food or a quick snack on the go or lunch. Basically, you can eat pizza for three meals a day in Rome, and it’s incredibly socially acceptable, if not encouraged.

JL: Where does pinsa fit into the pizza spectrum?

KP: Pinsa is a more recent arrival. I guess it had been invented by the time I moved there, but it really started to blow up more recently. It was invented by this guy in 2001. It’s a blend of three different flours – soy, rice, and wheat – and he says that it’s derived from an ancient recipe, which is pure marketing. That’s not true at all. But it’s a clever way to get people excited about a brand new pizza style. You just say it’s old and like no one ever checks. There’s no fact checking. And so that just gets published over and over again. It’s an oblong pizza that’s baked ideally in a wood-fired oven. It’s generally blind baked, unless there’s tomato sauce on it, which they put all the tomato sauce on, bake it halfway and then put the rest of the toppings on. And it’s praised by the founder, the inventor of the pizza, for its digestibility. I mean in Italy, we really always think about pizza not just in terms of flavor and tradition, but also, how digestible is it? It’s an important method of judging.

JL: How did you and Dan come to meet and collaborate?

We met in Italy. He had come over with the Marta team. The Union Square Hospitality Group was moving into the Roman pizza space. They opened in the Martha Washington Hotel. They wanted to do Roman style pizza. They hired Dan to consult, and then they hired me to take them around and eat pizzas. Then we went all over Italy, and just really dug into the different styles like super classic Neapolitan style, the more iconoclast Neapolitan approach, and so many Roman things. That’s how we met and then we remained friends.

JL: I’m talking about the Italian view of U.S. pizza. Are there any styles that would baffle Italians that are available in the U.S? Like do any Neapolitans or Romans view something like Chicago style pizza as an abomination?

KP: No, not necessarily because it’s very similar in its thickness and baking approach to Sicilian sfincione. I think the flavor and the digestibility factor is a shocker.

Dan Richer: And the sheer quantity of ingredients.

KP: Yeah, the number of things, the amount of things on top.

JL: American excess. It’s one of our specialties.

JL: Do you remember the first pizza that you ever remember eating in your life?

DR: Not my first pizza, but my most memorable childhood pizza was our family always went to this place in Aberdeen, New Jersey, called Pizza village. And it was New York style pizza. A couple of Italian gentlemen owned it. And I went there my entire childhood. Just a regular plain slice. So integral.

DR: Pictures of the Amalfi Coast and the Leaning Tower of Pisa.

JL: What about for you, Katie?

KP: Probably Aljohn’s in the strip mall near my childhood home. They probably had the same purveyors of cheese and sauce.

DR: Without a doubt.

KP: Just like New York style. Lots of sugar. And, you know, nostalgic. I love just the really gummy…

DR: I like the gum line too. It’s such a defect in pizza. It’s a layer of under baked dough. Because either the fermentation wasn’t good, or the oven wasn’t hot enough. Or they put too much water in their tomato sauce. There’s a lot of reasons.

KP: For the edge by the crust.

DR: It’s like a layer in between the baked crust and the sauce. And it’s almost like a layer of pasta in the middle of it. Love the gumline.

KP: A-L-J-O-H-N’s. It’s a guy named Al and a guy named John. And neither of them owned it. They sold it to a Neapolitan family.

DR: I love it. Very creative name. The first restaurant I ever worked in, my first job as a human, I was 15 and I worked as a busboy in an Italian restaurant called Dusal’s. Two Sals. Sal and Sal.

KP: Yeah, that’s like a Neapolitan or Sicilian dialect for two.

JL: I was actually having lunch today with a friend from my hometown and he said he used to eat at your place in Maplewood. What was that one called?

DR: It’s called Arturo’s. I sold that about five years ago after 10 years.

JL: What was the first pizza you ever remember making, and how did it turn out? For both of you.