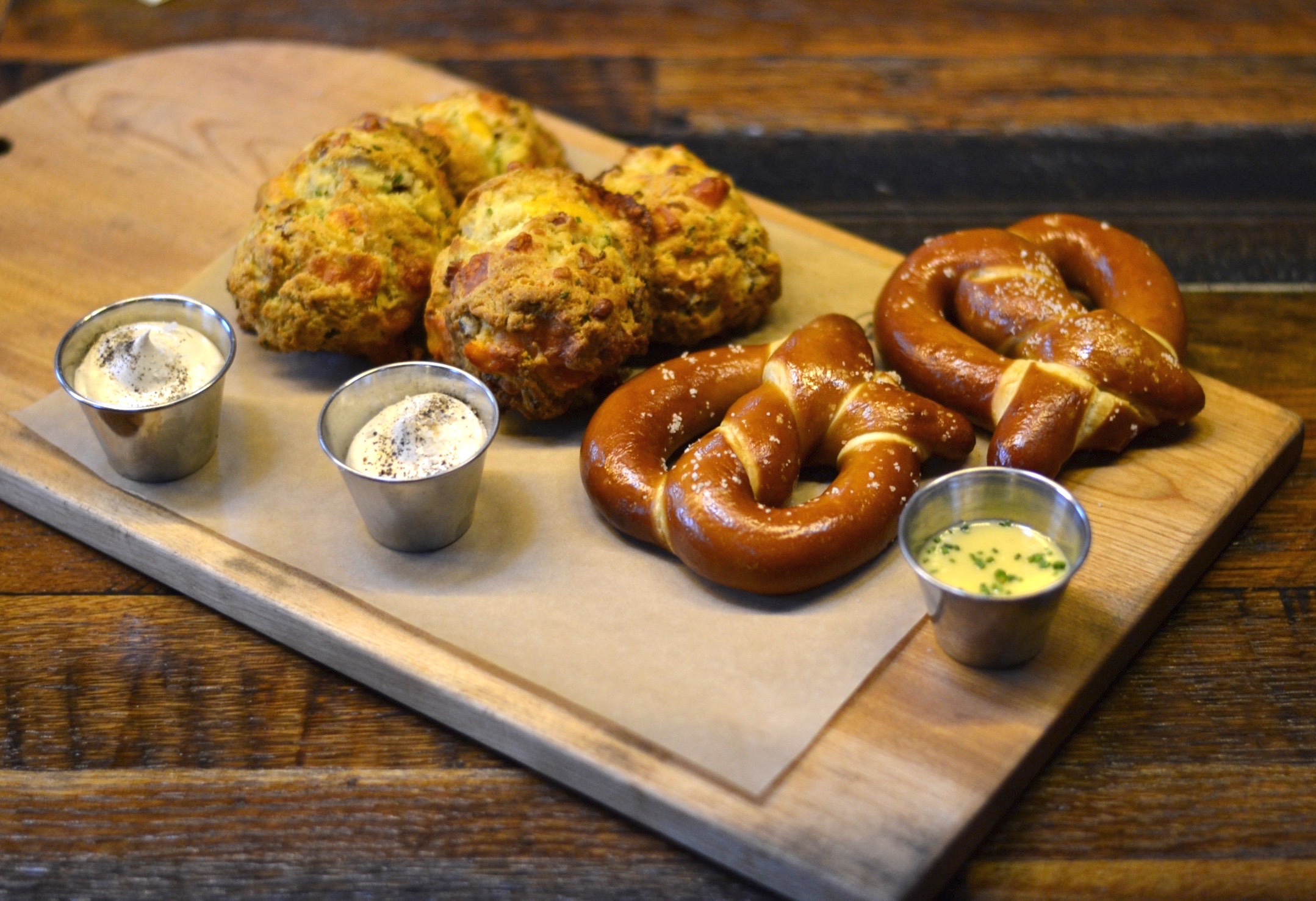 Pretzels feature prominently in M.B. Post's "pass the bread" board.

The pretzel isn’t a new thing by any means, but it certainly has started making more appearances throughout L.A., often in the shape of a bun, a re-worked crust, or a new thing to dip into a delicious sauce. We’ve scoured this great city in search of pretzels and its many iterations and below are some favorites, regardless of form.

Establishments appear in alphabetical order instead of in order of preference. At Röckenwager, their pastries are seasonal, staff is helpful, and breakfast is ample. And, for any West-LA-er, Röckenwager is the go-to place for pretzels. Röckenwager also has their pastries and pretzels at Whole Foods. Röckenwager has twists, rolls, sweet pretzels, and savory pretzels. And, more than just having variations, each one is a spectacular pretzel specimen. If a sweeter pretzel is what you prefer, their Mar Vista location has a raisin pretzel on weekends. -TM Röckenwager’s show pretzel is the jalapeño cheese pretzel. Think of this as a German personal pizza. No marinara, but plenty of jalapeños layered throughout the abundant cheesy top. The pretzel base holds its own against melted cheese and jalapeños complement the flavors quite well.

This is an unexpected pandemic venture from actor Adam Shapiro, a regular on the TV show “Never Have I Ever” and Philadelphia native. He started selling soft salted pretzels in late 2020 and got an unexpected boost from wife Katie Lowes (“Scandal”), who fills in for Kelly Ripa on “Live with Kelly and Ryan.” When Ryan Seacrest asked about her pregnancy cravings, she mentioned her husband’s pretzels. Shappy got Seacrest his pretzels and he endorsed them as “fluffy, puffy, and doughy in the middle,” creating instant demand for a product that wasn’t available to the public at that point. Shappy reluctantly started baking pretzels professionally and the operation soon grew so big he had to move out of the Studio City home kitchen while his wife was nesting with their newborn. Shappy trained bakers at BREADBAR in El Segundo and bought a delivery van that sports Shappy’s logo. His excellent pretzels are available at designated locations across L.A. -JL Philly native Adam Shapiro turned a childhood passion into a major side hustle.

Sharon Wang is a Thomas Keller Restaurant Group veteran who launched Sugarbloom in 2012 and initially created progressive pastries for Taza, a “social coffee house” in Arcadia that’s no longer in business. She later partnered with Eric Ng on a wholesale bakery in Glassell Park. Her scintillating Pretzel Croissant ($3.50) is available on a regular basis at local Blue Bottle Coffee bars and at other select wholesale accounts. -JL Kevin Bricklin’s enticing pretzels are available in many forms, including twists, buns and nuggets.

This is an awesome list. In addition, Wirtshaus on La Brea makes a delicious pretzel among other things at this German Beer Hall.
http://www.wirtshausla.com/home.html

Sean, thanks for the pretzel tip. I’ve seen the goliath pretzel at Wirtshaus, but haven’t tried it. Hell, you could probably see that pretzel from Santa Monica.

Great list! I just had a pretty great philly-style soft pretzel at rita’s in redondo beach:

Definitely wanna try the Clementine one – my husband goes there almost every day!

Lynn, thanks for commenting. I hadn’t heard of Philly Phanatics, but it makes sense a Philly-style restaurant would have a good pretzel. I’ve had great pretzels in Philly.