Savory pies can take many forms. They’re available either with or without a lid, gargantuan or hand-held, and filled with ingredients either luxurious or pedestrian. Learn about 15 Top Los Angeles Savory Pies, which are all satisfying, and occasionally subject to seasonal availability.

Numbered establishments on the map correspond to information below for easy reference. Establishments appear in alphabetical order instead of order of preference.

The first L.A. branch of Michael Mina’s steakhouse resides in Glendale, on the corner of The Americana at Brand. Bourbon Steak features modern flourishes, but one signature item dates back almost two decades, to when Mina was executive chef of San Francisco’s late, great Aqua. For his Lobster Pot Pie, puff pastry is baked over a copper pot that contains shelled claw meat, buttery, herbaceous brandied lobster cream, and market vegetables like cippollini onions, English snap peas, zucchini, and fingerling potatoes. Servers deconstruct the pie and serve the components tableside, on white plates.

Chi SPACCA is the latest Mozza Restaurant Group concept from Nancy Silverton, Mario Batali and Joseph Bastianich in their formidable L.A. compound. The focus is on chef Chad Colby’s considerable talents, which include textbook charcuterie and wood-kissed cooking. A cleaver sign hangs above the door on Melrose, so expect a meat-centric meal. One can’t miss dish from Macelleria (Butcher Shop) is the Beef & Bone Marrow Pie with beef cheek and button mushrooms braised in red wine reduction, rosemary and thyme, served in a flaky, buttery crust with marrow in the middle and a side of whipped potatoes. My server said, “In case you think you’ve hit a dead end with the marrow, flip it over.” This pie has plenty to give. 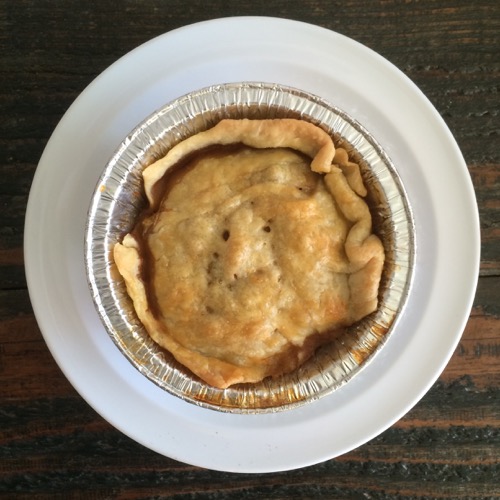 It’s been awhile since I’ve seen this item at Father’s Office in Culver City’s Helms Bakery complex, but hopefully this mention inspires chef Sang Yoon and his team to return the lamb pot pie to the mix for winter. A flaky puff pastry rectangle cradles braised neck and shoulder meat, root vegetables and gravy that incorporates one of the delectable porters they pour on tap. When I had it, the Porter was Walker’s Reserve from Firestone Walker Brewing Co.