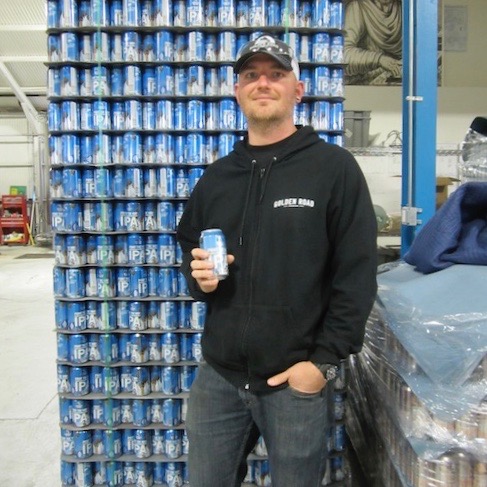 Jesse Houck took a break from brewing to stand in front of Golden Road's new Point the Way IPA cans.

Golden Road Brewing has a different look these days with the recent arrival of Jesse Houck as brewmaster at the destination Atwater Village brewery and pub. I recently sat down with Houck inside Chloe’s before the re-release of the Wolf Among Weeds to talk about re-booting the Double IPA and his brewing career, which previously included stints at Gordon Biersch, Drake’s Brewing.

How would you describe the new Wolf Among Weeds?

Houck explains, “It’s on the higher end for a Double IPA” but “still light in color.”  More a “sessionable DIPA” that utilizes the English specialty malt – Simpson’s Golden Promise – and a dank mixture of hops including Simcoe, Chinook and CTZ.

How do you start building a recipe?  Do you start with hops, malt or yeast?

50% is driven by the desire to use a new ingredient that Houck wants to “play with,” or “checking out new hops.” The other half is a concept or style first.

It took a decade of working at various breweries before Houck realized that this is where he was having fun and being rewarded.

Houck mentioned Shaun O’Sullivan from 21st Amendment Brewery, and he also reserved praise for John Tucci who was brewer at Gordon Biersch when Houck was younger. He spent a “quick year” there, but Tucci “taught a ton” and Houck found out there was “so much to learn from lager brewing.”

What was the first beer you ever brewed and how did it turn out?

At first Houck did not remember but upon deliberation remembered brewing an XPA.

Is there a beer style that you think is under the radar?

“Simplicity” is the watchword for Houck who would enjoy seeing more of the “low ABV” and less of the “Double this and barrel age” mentality that is prevalent these days.

Is there a Bay Area beer that you are missing down here in Los Angeles?

Moonlight Brewing’s Death and Taxes top the list that also include beers from his last employer Drake’s and Trumer Pils as well.

What do you think the L.A. Craft Beer scene needs to become a better beer town?

Houck believes that “it is all set-up” to be a beer Mecca and that all that is needed now is “just time.” “Craft beer bars have led the charge” and more bars will follow when they notice the trend of craft beer’s growth.

16oz cans of Wolf Among Weeds will be available mid-April and can be found on tap around town, especially at the family of bars that includes Tony’s Darts Away, Mohawk Bend and the Pub at Golden Road.