There’s something to be said for critical mass. When Robert Stehling and wife Nunnaly Kersh opened Hominy Grill in 1996, Cannonborough Elliotborough could hardly be called fashionable, but little by little, the neighborhood west of downtown evolved, allowing for growth opportunities. New York architects Bill Bowick and David Bouffard opened Sugar Bakeshop in 2007, and the path may already have been blazed, but it still took deft execution to turn their cupcake-centric bakery into a success.

My father and I arrived during Sugar’s pre-Christmas rush. Even though Charlestonians were picking up special orders in droves, the bakers still made sure to line the counters and fill cases with a number of tantalizing options, and cupcakes were just the beginning. Baked donuts are a byproduct of Sugar’s fryer-free facility. My single ring wasn’t as crispy as a fried donut would have been, but it made up for that (in one regard) with pillowy softness. My baked cake involved wintry flavors – clove, cinnamon and nutmeg – and sported ginger-cinnamon frosting that bakers dotted with candied ginger. They also made powdered donuts and a variation of the donut I ate with maple frosting. Scones are notoriously dull, but Sugar’s scone had an almost biscuit-like quality, with sugar granules, but no bone-dry nooks or crannies. It came with a pat of soft butter and a small container of local honey. Nothing else needed.

On Christmas Eve, we returned to pick up our cake and pie for Christmas. My dad previously requested Senator Russell’s Sweet Potato Pie, but the pie, named for bygone Georgia Senator Richard B. Russell, never materialized. Chocolate pie looked at least as good as the coconut cake, with a pecan arrangement that reminded me of a clock face, but it fell flat. Gritty, fudge-like caramel was my main problem with the pie. The base reminded me of a brownie, and a fairly dry one. If only Senator Russell got a chance to filibuster during the caramel application.

One disappointing pie doesn’t wreck the overall good vibe emanating from Sugar Bakeshop. My primarily successful early experiences may even prompt me to try one of their signature cupcakes in 2011. 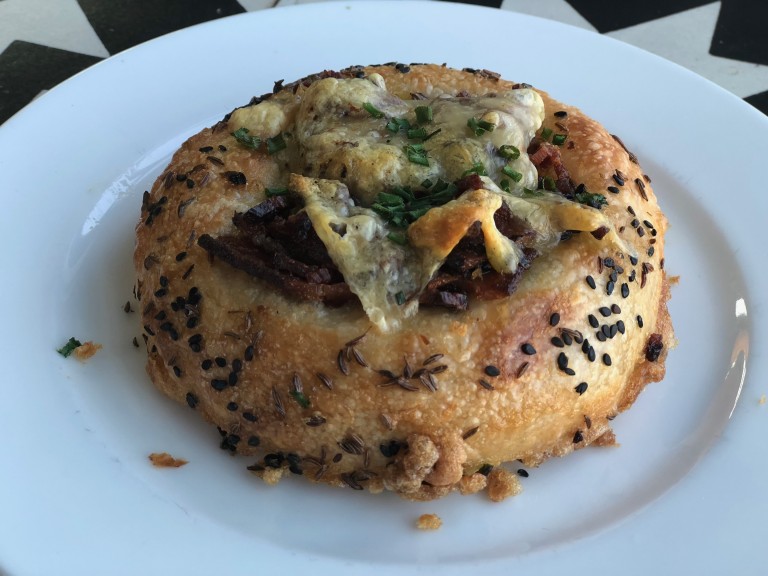 All I can say is oh my goodness.

Eastside Food Bites, what bite looks best to you at Sugar?