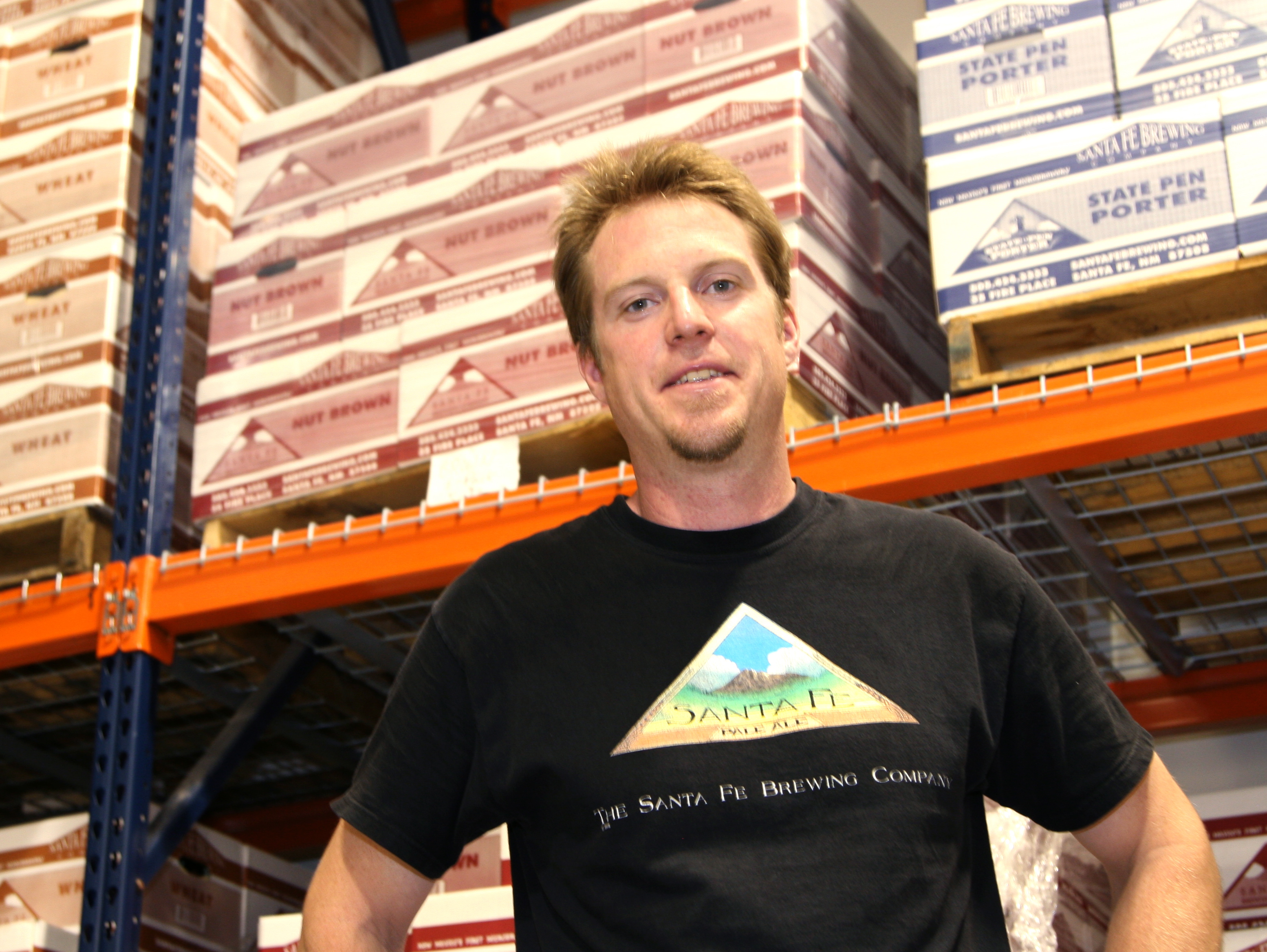 When people think of Santa Fe, certain thoughts spring to mind: picturesque mountains, adobe buildings and strings of dried chilies. Craft beer has been pretty far down the line, but Santa Fe Brewing Company brewmaster Brian Lock has been working to change that perception since arriving at the 22 year-old brewery in 1995. In the past 15 years, the Portland native has gone from partial to majority owner, and the brewery has grown in size and scope. We recently met at Taste of Santa Fe and subsequently spoke by phone, where Lock discussed his background and approach.

Most of the interest came as a result of growing up in Portland, Oregon, which was home for me. Just being around the craft beer revolution in the Northwest and Portland when I was in high school kind of promoted the idea and influenced the passion for good beer. I was in high school and one of the video arcades closed down and turned into one of the first McMenamins brewpubs. That was the mid 80s. I started to do some home brewing in high school, the interest increased and got more exciting.

I think I was in middle school and one of the first beers I remember on a craft level was Full Sail Amber Ale. It was on the coast. My father was kind enough to give me a sample and that was kind of my introduction to the craft beer revolution and world.

The first beer I ever did was an amber ale, using a malt extract kit, and it didn’t turn out so well, but it certainly sparked the interest, and it got to the point that I was doing all green brewing instead of the extract, and it certainly got better.

Where did you go to college, and what was your major?

I went to Southern Methodist University. I was a business major and sociology minor.

How does your major factor into what you do now?

Certainly the business aspect, the experience in learning how to run a business, some of the required classes helped to get me where I am now, in terms of normal business practices. The social aspect of the beer industry has contributed as well.

What was your path before arriving at Santa Fe brewing?

The fist job I had was with Nor’Wester, which is now out of business. I started out there in the tasting room as a cook and then just wanted to get my foot in the door. I backed into the production side more, interviewing and asking lots of questions of the brewers, getting more involved on the production side. I moved back there as the guy that cleaned everything. That only lasted for about three months, then I did a small stint at Widmer that only lasted a couple weeks before I had an opportunity to move down to New Mexico.

What brought you to New Mexico?

I wanted to move someplace that was smaller and had some opportunity in the craft beer industry…The climate was also kind of nice. I was looking for a little more sunshine. I moved down there mostly due to those reasons, and one of my college buddies grew up in Las Vegas, New Mexico. He said, Let’s move to Santa Fe, this was the mid ’90s, so we packed up and decided to go down there.

In terms of a personal relationship with a mentor, I don’t, but I’ve obviously read a lot about Ken Grossman and what he’s accomplished at Sierra Nevada, and of course Jim Koch at Sam Adams. Certainly those two guys to me stand out as some of the frontrunners in the whole craft beer revolution.

What do you think distinguishes Santa Fe Brewing beer from other breweries?

What we kind of pride ourselves on is bottle conditioning, which isn’t a common thing in the craft beer industry these days. Actually bottling our product and letting it go through secondary fermentation in the bottle, adds to complexity and the shelf life.

I certainly like hops, so IPAs are a style that I always like to try wherever I am…Then I really prefer lagers and there’re not a ton of lagers in the craft industry, which is more predominantly ales. We do some rotating seasonal lagers that I really enjoy, pilsner in summer and Oktoberfest in the fall, a Märzen style lager.

What’s the latest beer you’ve been developing and what’s your approach been?

The recipe we really worked on quite a bit over the last year has been our IPA, because we never packaged and sold an IPA on draught. We just launched Happy Camper iPA, which is available in a can year round. We wanted something a little more aggressive to the American style. Prior to that our IPA was fairly English style, more balanced with the malt profile, but still had some hop kick, so we went for something a little bit more aggressive and American in style. It’s about 82 IBUs and 6.6% ABV. We went heavy on the dry hopping with it. Before we were using a half-pound per barrel, now we’re up over a pound per barrel, so it’s got a big nose.

How do you feel about collaborating with another brewery?

That’s a great idea. There have been quite a few recently who have done that. I would be very interested in collaborating with another brewery at some point if the opportunity presented itself.

If you could only drink one more glass of beer, what would be in it?

If I only were able to get one more, I’d want it to be pretty strong, so I’d probably go with our Chicken Killer Barleywine, which is 10%, so I’d get a lot of bang for the buck.