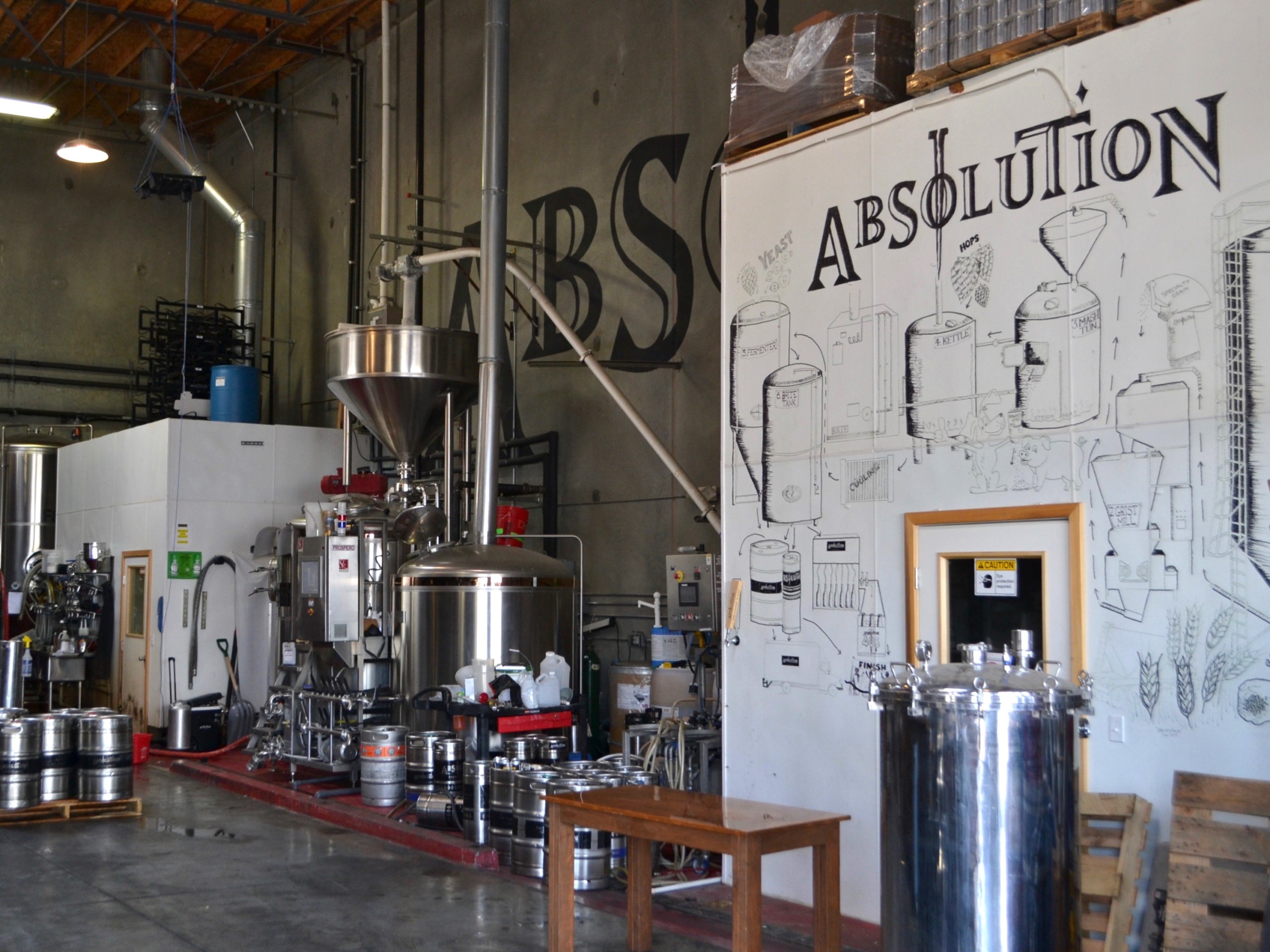 Absolution Brewing is part of a second wave of Torrance breweries.

Torrance has been the leading the way for brewery openings in the Los Angeles area and another newbie opened up shop recently. Absolution Brewing Company has found a home in the back of an industrial park (no surprise there) a mere 10 minutes from both Smog City Brewing, The Dudes’ Brewing (who I will talk about later) and Monkish Brewing (who I will also discuss more later).

Wes McCann, the brewer, Steve Farguson, the Chief Consumption Officer, and Nigel Heath, the Chief Taster, helm Absolution. They have an ambitious amount of brews up on their tap list that should show up in the coming months. From Belgians to Session IPAs, and they even have a link to a local farm that may provide some future ingredients.

I sampled four of their beers and came away with the feeling that they have some ground to cover to catch up with the established players just in their city. Their stout at a small beer 5.1% ABV is the most flavorful of the bunch with a light roasted taste that is very pleasant. The stronger porter was a little too thin for me and could have used a bigger malt backbone. The Crimson Red was passable but not noteworthy and the IPA was a strange combination of soapy and sweet citrus. But the folks behind the counter are willing to talk about their beers and their plans so maybe with some tweaking the beers will get stronger.

In other Torrance news, The Dudes’ are in the midst of getting all their I’s dotted and T’s crossed so that they can open up their taproom to the public, but in the meantime, you can find their canned offerings pretty much anywhere. Monkish just turned two at the beginning of the month and Henry Nguyen has been crafting some really flavorful beers. Seme Della Vita with pistachios and vanilla beans was a particular standout and he has even brewed up a couple really nice hop showcases in Altar Boy and Galaxy Defender. You should also search for bottles of their 2nd Collaboration with Select Beer Store (which also turned 2) by the name of Select 2. If you are really attentive you might see Select 2.1 on tap as well.

Your Beer of the Week comes from Firestone Walker and is their Opal Saison from the growing brewing company. “Bringing down the Farmhouse! Our interpretation of the rustic Wallonian Saison style is a harmonious blend of rustic grains, spicy yeast and unique sauvignon blanc tones. Inviting lemon grass and gooseberry meet peppery spice and fresh grain aromas. Spicy Belgian yeast create a complex yet dry and refreshing canvas with splashes of citrus and stone fruit with a bright tropical white wine finish. Hop bitterness is assertive yet harmonious rounding out slightly tart and refreshing.”

Your Homework is to get on the bandwagon (if you haven’t already) and send some money over to Three Weavers (via their Kickstarter campaign). They are over 65% of the way to bringing beer to Inglewood. I’m thinking concert at the Forum and beer after.