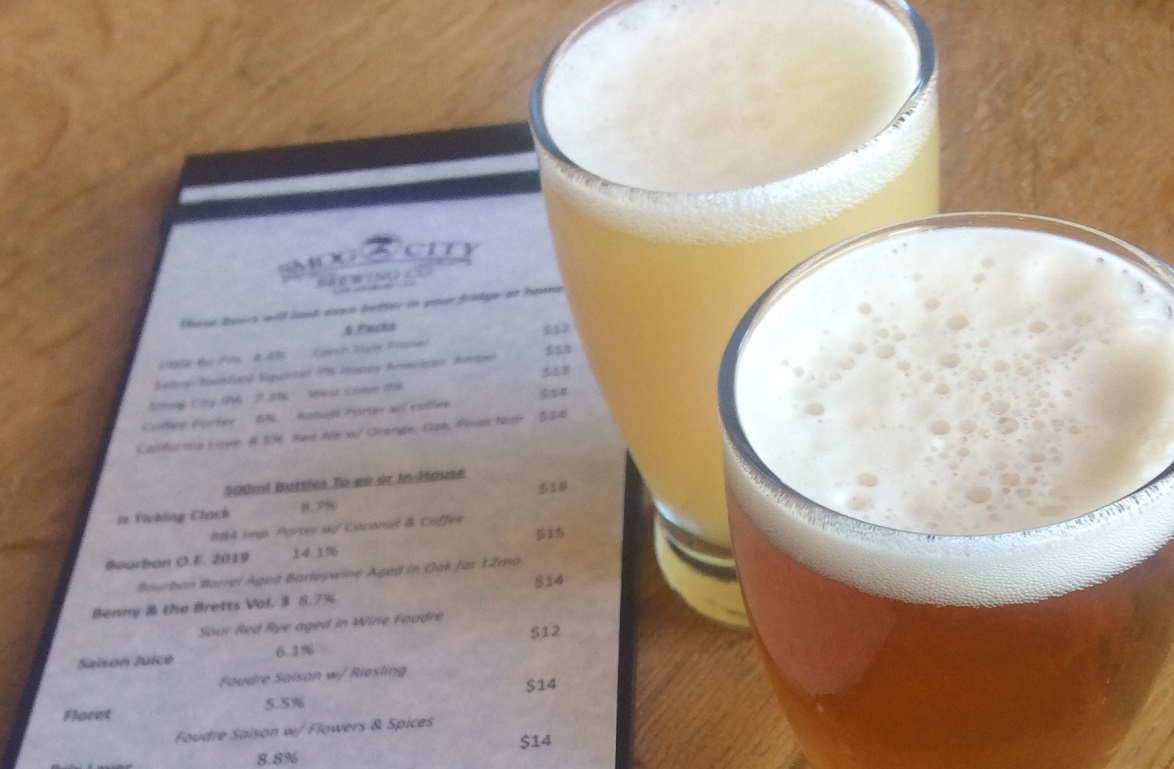 If Smog City Brewing had a motto, it just might be “Here We Grow Again.” The Torrance based brewery from Laurie Porter and Jonathan Porter has a wood cellar across the industrial park from their main brewery also has a shipping container at the original SteelCraft food and drink space in Bixby Knolls, a spot at the Hollywood Farmer’s Market and an in-progress satellite taproom at a Glendora food hall. They also took over the shuttered Zymurgy Brew Works in Torrance.

The re-branded spot grand opened on October 12, tucked into a very long strip mall. They splashed Smog City logos on to both walls and their trademark TV display menu will tilt towards their Wood Cellar offerings and a smattering of other styles. On opening day, I was able to taste a hazy IPA, Stress Level – Gracie; their version of a German Oktoberfest, Smogtoberfest; an aged saison; and a beer made with yams.

The space can get loud when a large group is inside, but you can easily tuck yourself into a seat by the corner and use the barrel tables to put down your flight since there are too many options to choose just one beer from the menu.

Smog City West can also be your source for to-go bottles as they built up an impressive repertoire of Wood-Aged beers. They are especially adept at using fruit and spices to create multi-layered sour and farmhouse beers. Echo Echo Echo combines lavender and second-use peaches and is especially complex. If you haven’t had their Quercus Circus blend, well, not only is that one of oldest sour beers from an L.A. brewery, it is still one of the better examples out there.

With all of their locations, it is hard for anyone to say that they haven’t had a Smog City beer in a while.

My Non-IPA Beer of the Week comes from Stone Brewing who recently celebrated their 23rd anniversary. Buenaveza Salt & Lime lager has a Dia de Los Muertos look to the label design and the beer hits the mark with a balance of savory and citrus on top of a simple lager base. Just right for SoCal’s long hold on summer.

With Beer Belly away from the Koreatown beer scene, Southland Beer holds the mantle of where to drink on Western Avenue. On October 19, they are turning four and celebrating with a beer list filled with heavy hitters. They are bringing special bottles from their cellar like Cantillon, De Garde, Jester King, Bottle Logic, and Holy Mountain. They also have a $5 special for beers pouring taps 1-4.