Opening chef Marc Vidal hailed from Barcelona and worked with Centurion to sculpt a Spanish base. The chef during our meal was Luis Quant, a Nicaragua native with a Chinese father. Nicaraguan and Chinese accents don’t appear on the menu, but bold Spanish flavors remain. The best tables in the two-story, Spanish-style hacienda are probably upstairs, along an outdoor mezzanine that overlooks a side street courtyard. My family dined downstairs at a table with white tablecloths, surrounded by sumptuous brown booths. Even though tuna tartare made a Food GPS list of The Most Played Out Dishes, it remains one of my stepmother’s favorite dishes, and one order ended up on our table. Tartar de Atún ($11) consisted of silky tuna folded with avocado, mango, and soy sesame vinaigrette, formed into a square and plated with a smear of tangy yogurt caviar. This was a pretty good version of a what’s no longer a must order dish. Seafood Ceviche ($11) strayed from tradition, and even took a turn toward Peru with the inclusion of aji amarillo and starchy choclo (Andean corn) kernels. Still, the tart acid-washed melange of squid, shrimp and white fish was solid, especially topped with thin, crunchy sweet potato chips. One of my favorite dishes was also the simplest, a skillet loaded with plump, sweet Gambas al Ajillo ($11), large shrimp sautéed with garlic, Guindilla pepper and brandy. Chistorra en Sidra ($9) involved sliced, thin Spanish pork sausage links cooked in cider. The chistorra were a little too dense and sweet for my taste, and were kind of unwieldy to eat on grilled bread. The sausage kept straying. Cochinillo ($24 for full size) sounded amazing, with griddled suckling pig squares plated on vanilla oil-accented apple compote. The tops and bottoms of the pork sported nice sears, but the meat was ultimately too dry, even with some runs through the upmarket apple sauce. Garbanzos ($8) were a flavorful side, with slices of chistorra and morcilla (crumbly blood sausage) partially submerged in zesty, house-made tomato sauce. My father opted for a frothy Pisco Sour ($12) that involved Pisco 100, fresh lime, egg white, simple syrup and three dots of Angostura bitters. My beverage of choice was the signature Por Fin Sangria ($8), which was probably too thin given the sprite. It also contained red wine, simple syrup, triple sec, Brandy and fruit. We consumed plenty of protein and could only muster enough hunger for a single dessert: Torrija ($8). Caramelized slabs of milk-soaked brioche sure looked tantalizing, especially when factoring in coffee ice cream set on cookie crumbs and streaks of rich plum sauce. Unfortunately, the bread was too soggy, and even if that’s traditional, it wasn’t especially enjoyable.

Por Fin delivered a satisfying meal in a warm setting with a few standout dishes, but is the restaurant really the best in Coral Gables? That’s a question I hope to answer no future visits. 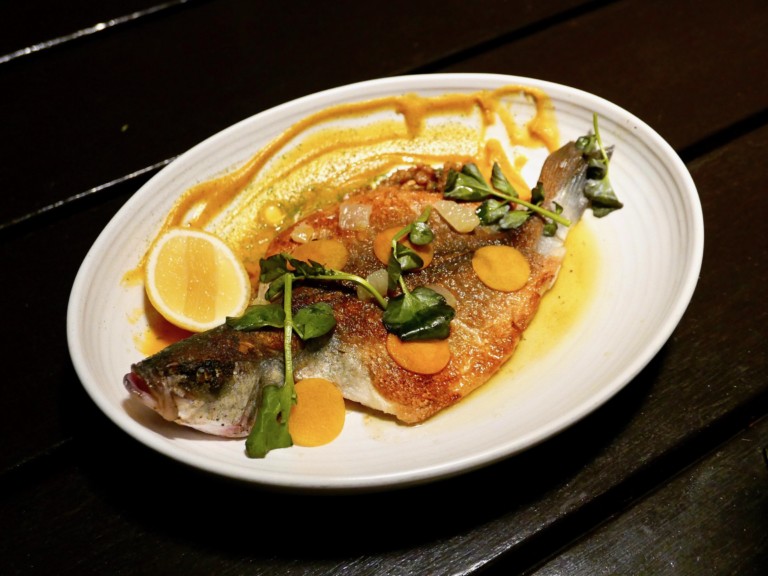