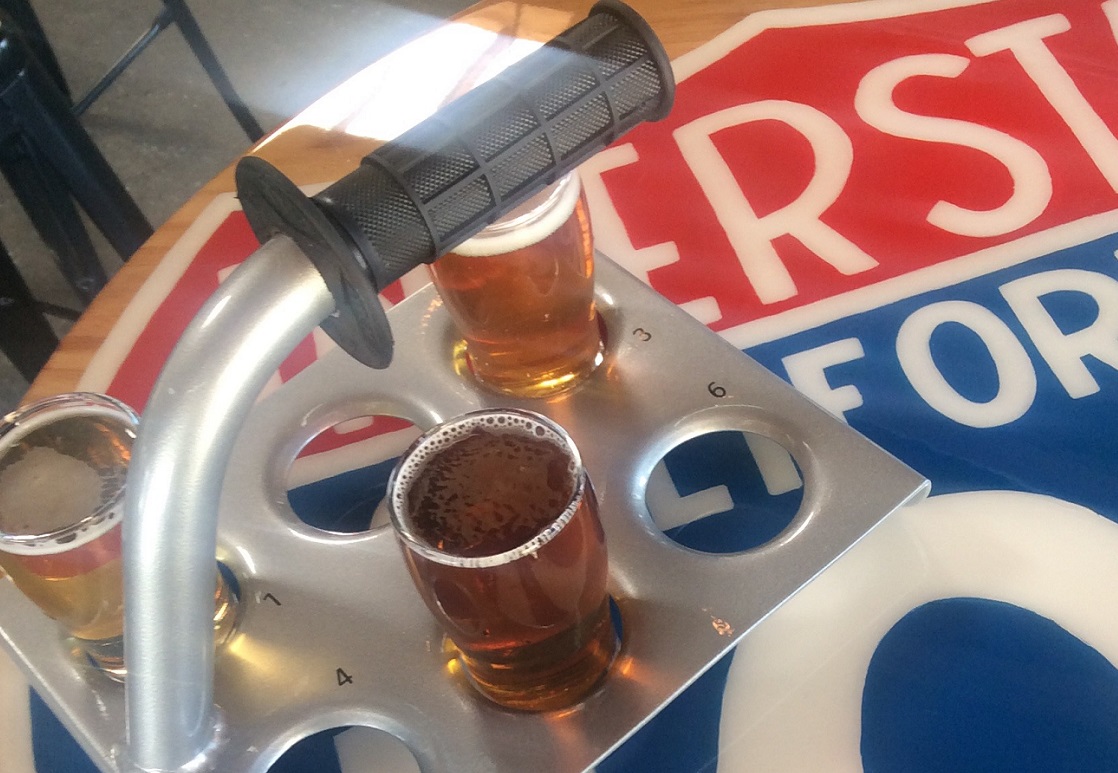 Street names like Nevada and Illinois may be from out of state, but El Segundo’s two newest breweries are carving out niches specific to SoCal. Niches that revolve almost more around the theme than the beer.

Upshift Brewing, right off Sepulveda Boulevard, is a new to 2019 brewery that’s all about car / motorcycle culture from the license plates behind the bar, to the hubcap accented barstools and table tops with freeway sign designs. Even the flight paddle was kitted out to resemble the grip of a motorcycle handlebar while still holding a six-round taster flight.

With beer names like Pole Position and P-R-N-D-L Pale Ale and Kolschenwagen, if you have a beer lover who is into the Southern California car culture, well this taproom will certainly tickle them.

Surfridge Brewery takes its name from the geography of the area and when you step out onto their patio and take in the view of the iconic light blue water tower with El Segundo painted on it, you know where you are.

This October-opened brewery has taken a shine to a sedate and calming garden spa theme. Plants are everywhere, including a hop display near the tap handles (which are environmentally friendly and gem-like in appearance). You can’t tell what you are in store for from the street since only a small Beer sign is visible above the door.

Beer wise, what both of these spots have in common is a hearkening to early taproom days. There were not any trendy beers on tap. I saw more pale ales in these two spots than on any 40-tap list in a craft-centric beer bar. These beers were very throwback West Coast in approach.

Whether you are in the mood for cars, views or IPAs (at the original brewery in town, El Segundo Brewing and their nearby Pint & Slice), the El Segundo taproom scene is filling out nicely.

This year saw an influx of Oktoberfest beers and celebrations, enough to suck the pumpkin air out of the room, or fermenter. Let’s celebrate a long time maker of gourd beer and a brewery that has kind of dropped off the beer geek radar a bit. Kern River Brewing transitioned their pumpkin ale into 16-ounce cans and thankfully, have not made it a pumpkin milkshake IPA. This beer is made with real pumpkin and given a kick of allspice to remind you of the iconic fall pie.

The Casks are back in town as Yorkshire Square Brewery breaks out into the parking lot of their Torrance home to showcase cask ale in all of its traditional and un-traditional forms. This year, the Cask’s Not Dead party is on November 9. 30+ breweries will present their beers straight from the cask as a counterpoint to our carbonated keg culture.