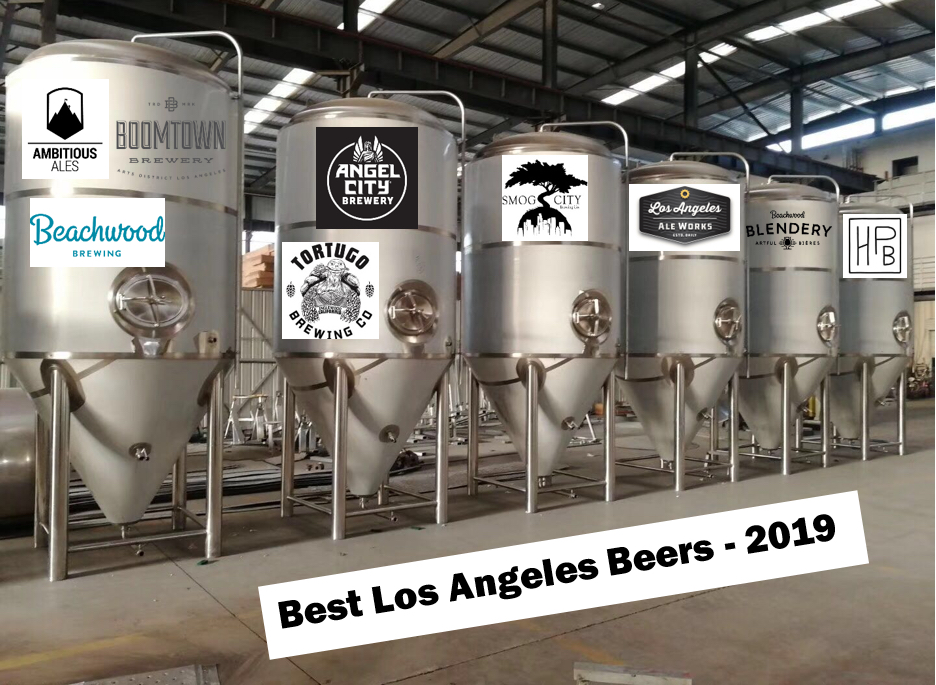 This year, you will probably see a lot of Top 19 Beers of 2019 lists. Next year will bring the inevitable 20/20 lists, but I want to focus on (9) SoCal best beers, (2) California brewed beers and then I will toss in a pair of out-of-staters that I really loved too for an uneven lucky 13 stand-outs.

Some beer ingredients make you wonder where the recipe came from, and Fleurs is one of those beers. Lavender, chamomile and strawberry (all unique flavors) inside a simple Belgian Table beer? Well, it works and works well from this new Bixby Knolls brewery.

I initially thought this would be light and tropical, but this was no wimpy Saison. This was practically an imperial Saison layered with a heavy hand of pineapple that made this beer a double threat.

8 hops – Mosaic, Citra, Galaxy, Waimea, Ekuanot, Amarillo, Comet, and El Dorado – make up this big DIPA from Beachwood and somehow instead of a muddle, this was a jolt of bitterness with a wide variety of flavors.

This beer was a collaboration with Homage Brewing and they found a way to make a beer loaded with pears a real treat. If pressed to pick an overall #1, I would point to this bottle. I sampled it in two different locations and it impressed each time.

Next Year, the movie “Parasite” might be bringing home an Oscar and this year it counts as one of my top beers in the crowded IPA style. With the smell of popcorn hanging in the movie theater, this beer cut through the aroma noise to deliver a citrus take on IPA.

Bob Kunz and the team at Highland Park are my go-to for light beers and Pleasant Pils was my personal favorite from his light line-up. Always crisp and bubbly. L.A.’s champagne of beer.

Kveik yeast was the star ingredient of 2019 and it was paired up with Sabro and Idaho 7 hops for a real tropical fruit blast that still carried just enough bitterness along for the ride as well.

Maybe I have a soft spot for lavender. This combo of the herb with second-use Farmer’s Market peaches was a gentle touch of the two flavors swirling on top of a base of Saison that would be a perfect food pairing beer for practically any course of a meal.

I have to admit that this was not one of my favorite can labels that I have seen, but when the can opened and that first wave of aromas hit, I was taken in. This was a lovely straight up West Coast hop bomb that also had some unique layers underneath.

With the Rise of Skywalker coming to movie screens, it is appropriate for the Non-IPA Beer of the Week to be Lavabeer from Tortugo Brewing. Why? Because the label design for the 16-ounce can was designed by Nathan Hamill. Yes, the son of Skywalker. The beer from the Inglewood based brewery is “An American Red Ale brewed with Simcoe, Citra and Dry Hopped with Centennial Hops” and reminded me of Sierra Nevada’s winter seasonal, Celebration.

Was it really 12 years ago that The Bruery started their 12 Days of Christmas beer series? Well, if you would rather drink then sing that old chestnut of a holiday song then head to Naja’s Place for the 12 Days Collection on tour. The following beers will be pouring: A Partridge in a Pear Tree, 2 Turtle Doves, 6 Ladies Dancing, 8 Maids-A-Milking, 10 Lords-A-Leaping, 11 Pipers Piping and 12 Drummers Drumming.

[…] January 9th – I highlight some coming soon and in progress breweries to look for in 2020, the 40th Anniversary Ale from Sierra Nevada and Brewbies # 11. […]

[…] January 9th – I highlight some coming soon and in progress breweries to look for in 2020, the 40th Anniversary Ale from Sierra Nevada and Brewbies # 11. […]

[…] December 12th – The Brew & You Top 10 Beers of the Year, Lavabeer from Tortugo Brewing and The Bruery completes its 12 Days of Christmas. […]

[…] December 12th – The Brew & You Top 10 Beers of the Year, Lavabeer from Tortugo Brewing and The Bruery completes its 12 Days of Christmas. […]